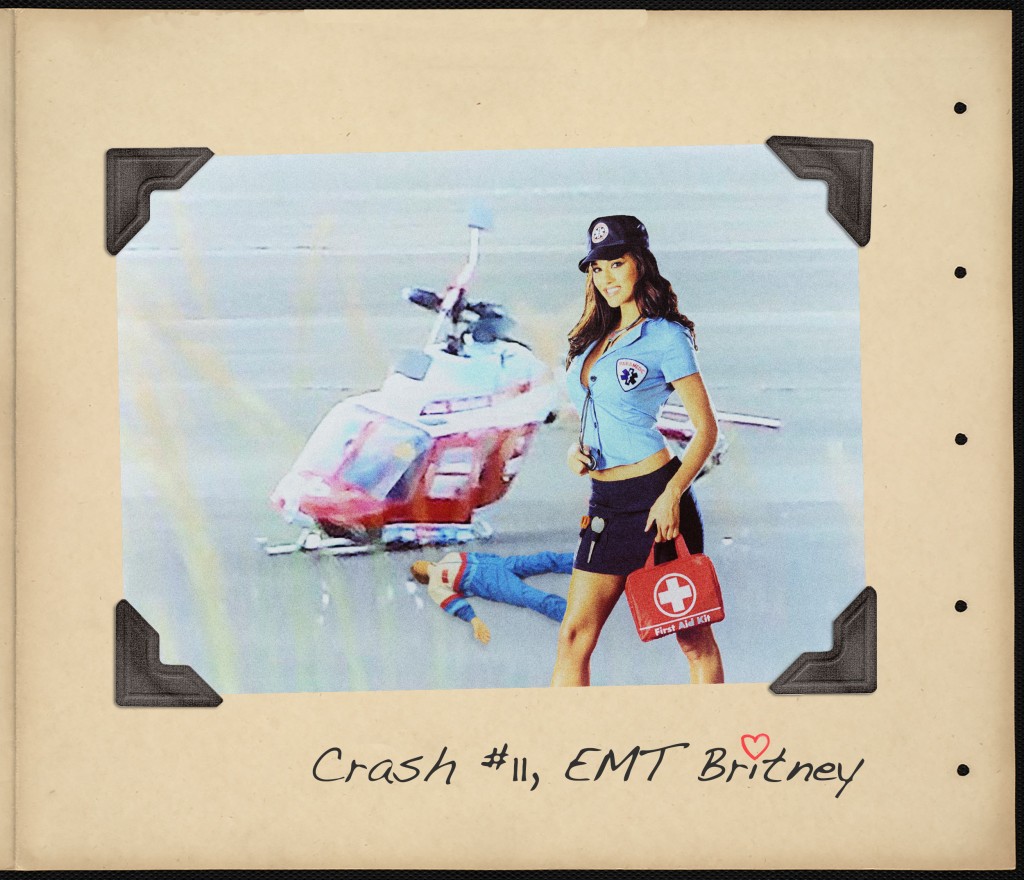 Lacking instrumentation other than a cell phone and a flashlight, and having nearly crashed into a lake, our aerial cinematography helicopter had landed in a farmer’s field at the end of last week’s blog. Farmer Fritz got the volunteer fire department to guide us to the airport, where we parked the chopper for the night, got into a rusty old Suburban, which I insisted upon driving, and headed to our motel where we’d catch a few hours sleep before a 4AM call time. The plan was to get up, mount the camera to the nose of the helicopter and be over the Apostle Islands in time to get sunrise footage.

En route to the motel, our pilot informed the cinematographer and myself that he was rather peckish, and might we consider stopping somewhere for food. I offered him the pie on a paper plate that Mrs. Farmer Fritz had sent us off with, but he required something more substantial, or as “luck” would have it, liquid.

We pulled up to a sleepy little tavern at 1AM—the only place left open in the town of Bayfield, Wisconsin. While they had stopped serving food, they were still serving alcohol, and that was apparently all the sustenance Captain Arg-More-Rum-For-Me-Mates required.

I went out to the truck and brought in the pie, which the cinematographer and I devoured with our bare hands while Jack Sparrow ordered six shots of tequila. As there were three of us, I assumed he meant for everyone to have two shots before closing time, and while I was just about to decline as I needed to be up in less than three hours, Captain Rumbottom slammed all six so fast his hands were a blur.

“What kind of pilot are you?” was all I could eke out, and he then proceeded to tell us exactly the type of pilot he was.

Of the many combat missions he had allegedly flown in ‘Nam, none were as dangerous, or “rewarding” as the many times he had flown around the tri-State area of Illinois, Wisconsin and Indiana. Nearly every single time, some sort of equipment malfunction caused the helicopter he was piloting (I am guessing it was the same one we were getting back into in a couple of hours) to fail, and Yablonski was forced to auto-rotate (a method of reversing the rotation of the chopper blades in order to reduce the speed with which the aircraft smashes into the ground).

I’m sure there was apple pie on my chin and falling out of my mouth—my jaw was, after all, resting on a sticky Formica table top as Yablonski went on to say that in each case paramedics were summoned, as it was thought the pilot must surely be mortally injured.

The really remarkable thing was that each time he crashed the helicopter, instances numbering in the dozen range, the first responders were buxom women wearing tight jumpsuits unzipped to there, who, in order to save his life, administered mouth-to-mouth resuscitation to an area well south of the standard mouth region, where such medical assistance is usually rendered. Oh lord.

It was at that time my spirit left my body and I hovered over the scene, noticing for the first time that our fellated flyboy was wearing a toupee. It was perfect. I paid the check and the cinematographer and I helped Leonard to the truck, as he was so drunk he could not walk. We had to be in the air in three hours.

At promptly 4AM I met the cameraman at the truck. At 4:10 I went to Yablonski’s room and knocked at his door, but there was no answer. I rapped louder, until finally kicking it as hard as I could.

“What?” came the grouchy reply.

“Uh, up and at ‘em, slugger.” Corny now, but at the time it was all I could come up with other than ‘get your f-ing ass out of bed you drunken sot or I will come in there and kill you and there won’t be any CPR in your future unless we can count beating you senseless with a tire iron as cardio pulmonary resuscitation.’

“Let’s just do this tomorrow,” he replied, and I swear I heard him pull a pillow over his head.

There was ground crew waiting for us later in the day, and a full on marching band all set for a parade scene that afternoon. There was no “tomorrow” on this job. I marched my ass to the office, which at 4:15AM was naturally empty. I rang a little silver bell on the counter to no avail. I went behind the counter, found a key to which the word “Master Key” was taped, and I stomped back to Yablonski’s room and let myself in. I glanced around for something with which to poke him, fearing should I get too close he’d mistake me for a paramedic and think I was there to…it doesn’t matter.

I ripped the pillow off his head, yanked the blankets away and screamed, “GET UP!”

Ten minutes later we were in the Suburban on our way to the airport. The cinematographer had the camera mounted to the nose of the aircraft in nothing flat. We fueled up the chopper and made it over the Apostles just in time to miss a spectacular sunrise.

Next stop on the Wisconsin Death Tour was to be Prairie du Chien, a gorgeous area of cliffs and valleys along the Mississippi River. En route we passed over a gentle hillside of honey blonde wheat, being traversed by a harras of stunning Andalusians, their white white mane flashing in the sun.

“Bank to the right!” I shouted into my headset. Yablonski promptly banked hard, and to the left. “Your other right,” I snarled, and he banked so hard to the right that my arm flew off its spot holding the towel under the motor, and oil splattered my face. By the time I wiped my eyes and could see again, the horses were about 5 miles behind us and had taken cover under a copse of oaks. “Go back!!!” I bellowed, and I swear we did a barrel roll in the Bell Jet Ranger. I grabbed the airsick bag and hurled.

The airsick bag was full, the bath towel was saturated, signaling we needed to add oil, and the horses were nowhere to be found. I vomited again once we were on the ground. Kneeling in the tall grass I looked up to see the Andalusians gallop past. They appeared to be laughing.

“You’ll want to empty that,” Yablonski said, motioning to the airsick bag clutched in my hand. “It’s the only one.”

I know we got some cool shots of the cliffs, hang-gliders, the river and other natural wonders because I have seen the footage, but I do not remember any of that. What I do remember is getting sick over and over because of the smell of the used airsick bag. And I vividly recall the thick fog we got lost in somewhere in the vicinity of the Prairie du Chien Municipal Airport. We literally could see nothing above or below us, and without a radio or functioning instruments we had no way to know our exact position relative to the airport, or the ground.

“We’ve got plenty fuel,” Yablonski informed us. “We’ll just hover here until the fog breaks. I think we’re practically on top of the airport.”

“They land private jets here,” I said, having done my research ahead of time. “Won’t we get crashed into?”

Yablonski’s shoulders went up and down as though he were laughing. “Sweetheart,” he condescended into his headset. “Jets fly at 30,000 feet. We’re hovering at about 1,500. Do the math.”

I did the math. “When they take off and land they must pass through every measurement between 30,000 and zero. We are in that zone!”

“You worry too much” were his last words before he decided he had had enough of being second-guessed and we were informed it was time to “punch through” and see what was below us. Before anyone could ask what “punch through” meant, we began a rapid descent that almost immediately resulted in the chopper jerking to stop, then bouncing up a few feet.

Until now the cinematographer had remained relatively stoic, which I later learned was simply him praying silently. “What the fuck?!” he yelled.

Down near about 40ft, where we were, the fog had thinned considerably, and I was able to see the power lines we had just bounced off of. I mouthed, “Power lines,” unable to make the sound come out, like in a very bad dream. The cameraman had no such trouble.

“Fucking power lines!!!!” he shouted, reaching over and hitting Yablonski in the face, at which time Yablonski yanked the cyclic stick and up we went, only to jolt to a stop. Yablonski fought with the cyclic to no avail. I looked out and saw one of our skids was hooked under a power line. I found my words.

After some maneuvering, Yablonski unhooked us and managed to put the helicopter on the ground at an abandoned gas station in the middle of nowhere. The cinematographer got on his cell and called a cab, telling them he didn’t care how much it cost, he needed a ride to Milwaukee—181 miles away.

“But we still have stuff to shoot,” I said weakly.

Yablonski stuck a forefinger into his mouth, and then held it in the air. “Fog’ll be lifting any minute,” he reported, based on this action. Like a zombie I climbed into the front of the aircraft where the cinematographer had been sitting, I put my headset on, and tried to figure out how the nose-mounted camera worked. By the time the fog lifted I felt relatively confident I could shoot the remaining footage, and we left the cameraman at the abandoned gas station, waiting for a cab. We fueled up at Prairie du Chien, and then headed to Milwaukee.

For all his faults, the one good thing about Leonard Yablonski was his absolute willingness to break the law in order to get me the coolest damn footage ever of downtown Milwaukee, including swooping between buildings only feet above the cars, buzzing boats in the Milwaukee River, and hovering right outside my friend Deb’s high-rise apartment on Prospect Avenue, over-looking Lake Michigan. Len got me so close I could tell Deb hadn’t flossed her teeth.

Len even delivered me to our wrap party. On Milwaukee’s Southside, where the best Mexican restaurants are, he put down in an empty lot across the street from Pepe’s taqueria, like I was a rockstar. I drank ten margaritas in a row and don’t remember anything until the next day when I called Yablonski to tell him I didn’t think we should have to pay the full amount since we missed sunrise over the Apostle Islands and lost our cinematographer half way into the shoot thanks to pilot error.

“Okay,” he said. “Whatever you think is fair.” I sent him a check for half, and then tried to put the whole thing behind me. The cinematographer reported Yablonski to the FAA, but saw him at a trade show a few years later, working his “aerial photo pilot” booth under a different name.

“You’re Leonard Yablonski!” the cinematographer hissed. “Nope. I am not,” Yablonski replied. “I am Sven Yablon.”

The moral of the story is best conveyed by a slogan rejected by the Wisconsin Tourism Association, “Wisconsin. Come here once.” Oh, I almost forgot. You get what you pay for.