Is This the New Face of the Resistance? 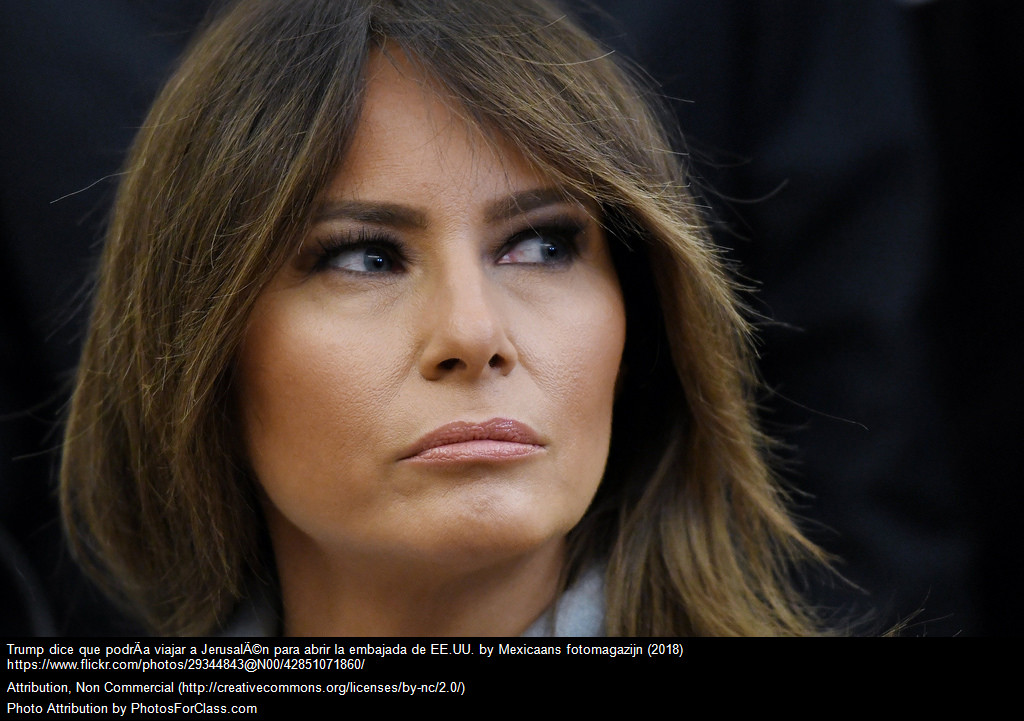 In a strange twist of fate it appears that the only human capable of putting the narcissist-in-chief in his place is a Slovenian mail order bride who exchanged a small grim life of Eastern European “lingerie modeling” for a more lucrative position (although she had no reason to think it would ever in a million years include living under a political microscope). While living under a corpulent wallet on legs had its obvious appeal, Melania was no doubt aware of her old man’s predilections. After all, he hit on her while on a date with a different woman, after cheating on his first wife with his second, then cheating on his second with pretty much everyone, and so forth, to the tune of three marriages, five children, porn stars, Playmates, Russian prostitutes with bulging bladders and a growing number of beauty pageant contestants who claim to have been groped with the child-sized vagina-grabbing hands of the President of the United States of America. (If you just threw up in your mouth you are not alone.)

Anyone else who even looks at the president sideways learns via Twitter or through the blowhole of Sarah Huckabee Sanders that they have just resigned, effective immediately, which makes Melania the most powerful person on earth. Only she is able to dominate, shun, humiliate and shame the most powerful man in the world without recrimination. If ever there was an alpha bitch in Yves St. Laurent sheep’s clothing, it is Melania.

Once he became leader of the free world all the smarmy, crappy, low, base, vile, nasty, immoral, unethical and illegal stuff that is the cornerstone of how he comports himself both personally and in business became public knowledge. We will never know the depth of Melania’s humiliation before her husband was elected, but now that his despicable actions are broadcast in a 24-hour news cycle, her degradation is on display for the whole world to see. The good news for Melania is that she has found a way to level the playing field and there’s nothing he can do to shut her down because his base simply would not tolerate anyone belittling his beautiful and shapely   wife.

The MAGA moonies fervently defended Melania’s honor when nude photos of she with another nude woman locked in a passionate embrace surfaced on the Internet (passionate in Melania’s range of expression looks exactly like she’s under anesthesia with her eyes partially open) even though these same people lost their minds when Michelle Obama went sleeveless. Any time anyone is critical of this FLOTUS her husband’s supporters froth at the mouth and say Michelle Obama is really a man, and Benghazi. So, nope. He can’t ridicule, smack down or silence “the babe” at 16oo Pennsylvania Avenue.

Melania is well aware that the hand swats, cold shoulders and gonad-shriveling daggers with which she looks at him are going to be meme-ified tout de suite. Whether it’s Botox, permanent Zoolander-face or steely resolve that prevent her from forming any expression other than abject acrimony, there is a flash in her eyes that indicates she is not taking this sitting down on a gold toilet.

In her most brazen act of revolt yet, Mrs. President just unveiled the child-welfare platform she plans to champion, using some pretty ironic language in her statements. “I do believe children should be both seen and heard,” she began. “And it is our responsibility as adults to educate and remind them that when they’re using their voices, whether verbally or online, they must use their words wisely and speak with respect and compassion.”

It’s a great cause, of course, but in her choice of words Melania managed to point a laser beam right at the orange head of the worst imaginable role model for these values, or any principals really. And it’s the gift that will keep on giving because every single time she mentions her cause, free press all over the world will reference her husband’s abusive comments on social media, his screes against adversaries, his aversion to the truth and his ridicule of the handicapped, heroic and dying.

“I am well aware that people are skeptical of me discussing this topic,” FLOTUS told a room full of tech execs and Internet-safety advocates at the White House in March. Pretty much every time she makes a public appearance, swats his tiny hand or opens her mouth she is shining a light on her husband’s bottomless well of character flaws, and there’s not a thing he can do about it.

Happy Mother’s Day to all the wonderful moms out there! Loves ya!