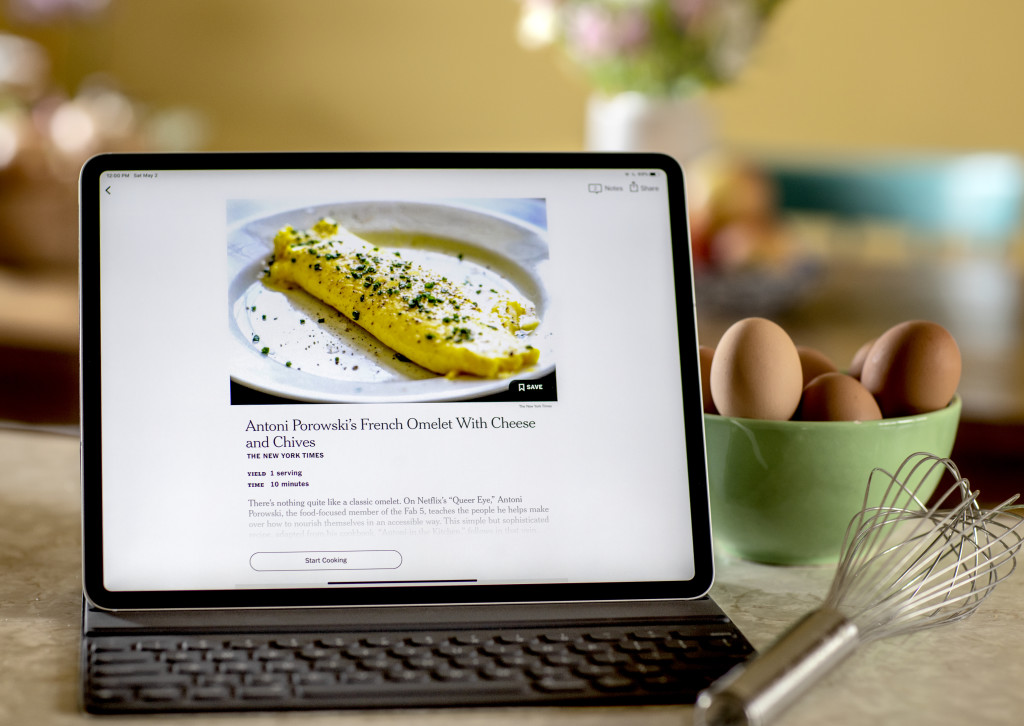 If you are like the 3.5 billion humans who have internet access you’ve probably discovered there are tutorials for absolutely everything on YouTube, which is not to say you will necessarily master all that you attempt. For me, making a French omelet was a more successful enterprise than say, cutting my own bangs or a misguided stab at elective surgery. (Note to self: home liposuction video likely fake.)

Being a stickler for details, I follow tutorials to the letter. If someone tells me I need a nonstick omelet pan, salon-quality scissors or a Vac-Assist Suction machine, I am on it like Trump on Lysol. I was thrilled to find a perky blonde woman with her own YouTube channel who teaches viewers how to DIY sexy curtain bangs v. the cut-straight-across-the-bottom look that made fifth grade the nightmare it was for me.

My fancy professional shears arrived not a moment too soon. By the time I had decided to trim my own bangs, my hair had grown below my eyes and on several occasions before my morning coffee I’d blindly stepped barefoot into dog poop, mistakenly having placed clumps of mud and tree bark in the dog poop bags the day before. I’d used Pledge instead of dry shampoo (nice shine and lemony fragrance) and learned that kibble tastes only faintly similar to peanuts although crunch-wise they are a close match.

I placed my iPad on the bathroom counter, closed the sink drain and had a poofy make-up brush ready to dust away any pieces of hair stuck to my face and eyelids. Mallory, possibly 12 years old but maybe 19, covered with ink and overly fond of the word “like,” demonstrated how to section the bang area with one of her long pointy bejeweled fingernails. (FYI the business end of a meat thermometer works just as well.)

Grasping the designated clump of hair between forefinger and badfinger, also known as middle finger and technically, in the Latin, digitus me’dius (even dead languages have YouTube channels), you take the clippers in your other hand and “chip in,” basically snipping off an infinitesimal, pert’ near invisible amount of hair. As if reading my mind, Mal assured me that the teeniest flecks of hair in the sink meant I was doing it correctly—and I needed to budget 2.5 hours for the project. Look, even though I had nothing better to do than bake something, eat something or drink wine, this was too much for me.

I gathered my bangs between the recommended extremities and decided to be more assertive with my chipping in. A chunk of hair fell into the sink, and with it some blood and a portion of my index finger not completely insignificant in size. (YouTube hosts a First Aid Channel. I found the episode on bleeding especially insightful.) 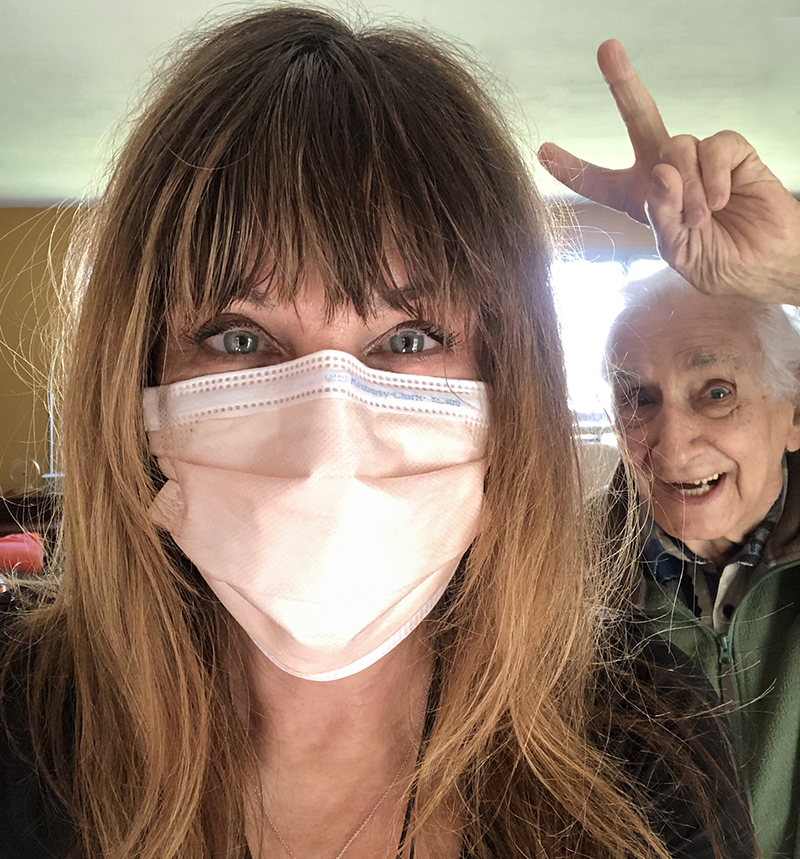 (The bangs eventually grew in quite nicely. Thank you, Mallory!)

My dad’s gorgeous silver mane, cut months ago to match a picture of silver fox Michael Douglas, is starting to look like Albert Einstein’s electric shock mop. Pops asked if I would cut it for him. I am an only child and as perfect a human being as one could possibly be (to my dad) so he didn’t notice the 2” x 2” chunk of hair missing from the middle of my forehead or the tourniquet on my left hand. I’ve found the perfect tutorial for the job. We are just waiting for my finger to grow back and a new shears to arrive from Amazon. Somehow the last one got broken with a hammer.

Each evening at the kitchen table as I serve platter after platter of the complicated cuisine I learn to make on YouTube’s New York Times Cooking channel, my husband and pops discuss a light at the far shore of Lake Nagawicka that blinks white until sunset at which time it blinks red. I am reminded of the unrequited love expressed so eloquently in F. Scott Fitzgerald’s The Great Gatsby, in which a green light across the lake, at lovely Daisy’s East Egg dock, represented Gatsby’s hopes and dreams for the future in the most luscious, glorious prose. (Spoiler alert: it doesn’t work out how he wanted.)

My two Toms waxed poetic on the the size of the lightbulbs, how tall the tower is and how far away it is exactly, so it didn’t come as much of a surprise when last Saturday, wearing what can only be described as expedition gear, they loaded up the Suburban with snacks, filled my dad’s Korean War canteen with tap water and took off for the far shore of Lake Nagawicka six minutes away. God only knows what they were doing out there, but it gave me almost an hour to “Learn How to Love a Married Man.” 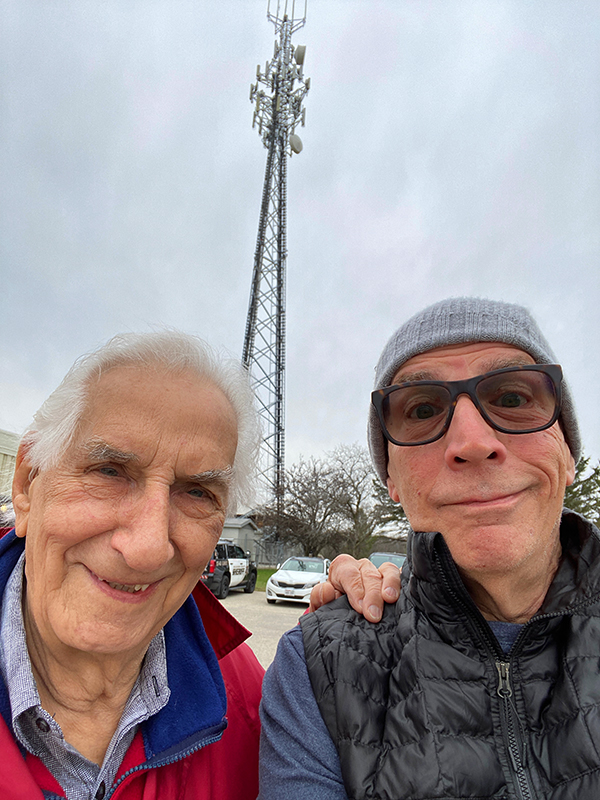 (I truly do not make this stuff up.)

These past six weeks I have learned how to love jicama, quinoa-infused vodka and my bathtub time so I figured a refresher course on romance to spice things up might be in order. To my amazement, the lesson had nothing to do with cooking, which I thought was a slam dunk, and even more startling it appears the married man to whom the tutorial refers is not the guy to whom you are currently married. (Suffice it to say, I am up on the how-tos should Bruce Springsteen stumble into Delafield minus the missus.)

This morning over coffee the guys sat at the kitchen table studying birds at a feeder on the deck, looking them up in A Field Guide to the Birds, courtesy of husband Tom. In addition to illustrations identifying the various birds, the book also describes, in words, consonants and vowels, various bird calls. Just imagine two men named Tom chirping, “what-cheer cheer cheer, whoit whoit whoit” like an anguished Northern Cardinal. All morning long. (The instant I find a lobotomy tutorial, I am down.)

There’s a YouTube video that teaches you how to imitate a blue jay imitating a hawk (that is trying to avoid being attacked by the blue jay) (FYI—blue jays are idiots). It is a very high-pitched, eardrum-piercing EEEEEEEEEEEEEEEEEEEFUCKKKKK!!!!!! It is a sound that flushes wildlife from the woods and occasionally shatters a glass in the china cabinet. I am learning how to do it. Three can play this game.

People are also using YouTube to lift our spirits and make us smile and for that I am grateful. My favorite this past few weeks is Some Good News with John Krasinski. This episode with a little girl whose opportunity to see Hamilton was dashed due to coronavirus is my very most favorite. The whole show is magical, but the chills start at minute 8:28. Enjoy and have a great weekend.