Bob Dylan, Sister Edith, a Bunsen Burner and Me 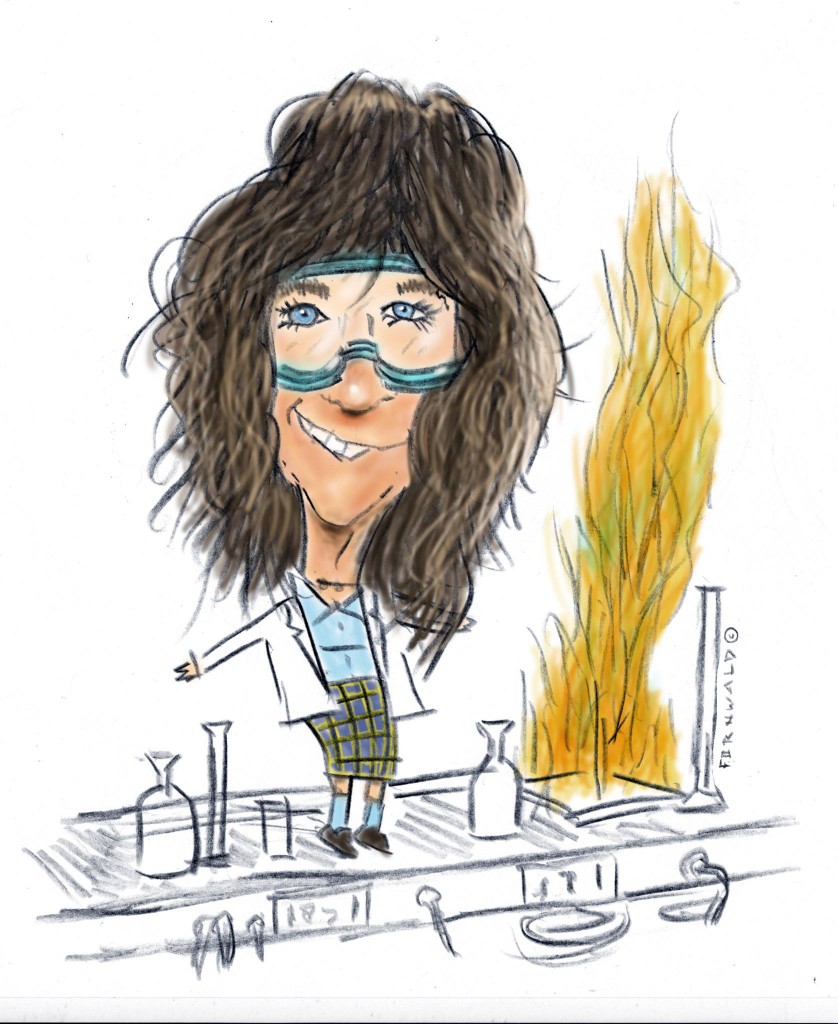 In high school I fancied myself a deep, soulful sort of loner with one or two close friends other than Bob Dylan, Rimbaud, Ezra Pound, Lou Reed and all of Monty Python. I didn’t participate in school sanctioned extracurricular activities. I went to zero proms (holding out for Dylan to say yes when I wrote to ask him each year), no athletic meets and not a single field trip other than junior year when our athletic director mistakenly thought I was an 18 year old senior with a responsible bone in my body and I went along to Germany, Austria and France as a chaperone for the French class. I saw the girls when we boarded the plane in Chicago, and then again at DeGaulle when we boarded for the return flight. My chaperonin’ philosophy was pretty much, “y’all be careful,” and off I went to explore the boys of Europe on my own.

The only après school events I really enjoyed were the father-daughter dinner dances. I went to an all girl Catholic high school, so the father-daughter soirees consisted of about 500 girls and 500 dads. I’d wait until cocktail hour was in full swing, then I’d go to the center of the room and shout, “Dad!” Every man in the place whipped around, hundreds of brandy old fashioneds sloshing out of their glasses. Good times.

My bestie, Marjy, and I would cut class and practice our guitars in the school’s stairwells where the acoustics were excellent. We also switched places in art and typing class. (A typewriter is an ancient mechanical or electromechanical machine for writing characters similar to those produced by printer’s movable type.) Marjy was fleet of finger and earned me an A in typing. I could throw a decent pot. It was win-win.

It was also nothing short of a miracle that we weren’t found out, as Marjy’s mom was the biology teacher (which did not benefit me in any way). When a Bunsen burner mishap set off a chain reaction, I was not given any special dispensation because of my personal proximity to the teacher’s daughter. I may have been reprimanded by the authorities, but I never got in trouble with my parents because we lived in the country, with a different area code than the school’s, which in the days of typewriters meant it was something called “long distance” to phone out of your area. The school wasn’t about to spend money just to tell my mom I’d cut a class, switched identities or burned up the biology lab. Again, good times.

I remember fondly the girls with whom I went to high school—a mostly cheery bunch of people who participated in and very much seemed to enjoy all the things that I did not. While I eschewed make up and pretty clothes, favoring instead the messy hair and grungy leather of Patti Smith, I often marveled at how grown up the other girls seemed. I was a skinny, unkempt poetry-obsessed rube in the midst of athletes, ballerinas, elegant swans and girls with a plan for the future—or so it seemed to me.

Looking back, I doubt they all had the future pegged, and even those who did have probably been at turns surprised, thrilled, disappointed and perhaps shocked by the way in which life has ultimately shaken out. The universe has a capricious way of lobbing curve balls in every direction, regardless of what we’ve planned.

So when there was a charity dinner to celebrate the school’s 125th anniversary last weekend, and a former classmate invited me to join others from our graduating class at a table, I thought, why not? It would be lovely to spend an evening with cheery, elegant swans. I had no expectation of what conversation would be like, or even whether I’d recognize anyone. I slipped into my leather pants and high heels, made my hair look as presentable as it gets, and I hoped someone would remember me as being a good egg, not just a surly poetry-writing arsonist.

I arrived earlier than any of my classmates, and was stunned when a small gaggle of elderly nuns surrounded me. I’d have known them anywhere, but why did they remember me? This couldn’t be good.

“Pam Ferderbar!” they chirped. “Are you still writing? Tell us everything!” Oh my. Their recollections of me were positive, ebullient, complimentary and so so sweet. They recalled the writing awards I’d won that I had long since forgotten—those otherwise meaningless accolades that made me want to work harder at placing the right words in the right order. To them I wasn’t a misfit. I was an author in the making. We exchanged warm embraces, old stories and a genuine fondness for “the good old days.”

At our table, I immediately recognized each girl/woman. I’d have known them anywhere. I envisioned each in the school uniform, walking toward her locker, sitting across from me in Mrs. Zagar’s class, or Sister Edith’s, or Mr. Teppler’s. I could recall how they fared scholastically, socially and athletically. I remembered whether they had sisters in school, who sat with whom at lunch, and who always smiled at me in the hallways.

Our conversation was warm and personal, washing away the years since we were girls together. Now women—some with children, some without—some married, divorced, widowed—all civic-minded, hard working, generous and kind, there was nowhere I would rather have been than at that table.

A friend recently told me that as we grow older we don’t change. We become more entrenched in whom we’ve always been. The grade school bully becomes the jerk down the block who yells at kids for stepping on his lawn. The young co-worker who throws people under the bus when she makes a mistake becomes the old crank whose kids never visit her in the nursing home where the other residents hide her walker.

The girls who were kind and generous, funny and bright, witty and optimistic in high school have become polished and gently worn versions of their younger selves. It was a privilege and an honor to sit with them. (Thank you Mary, Laurie, Meg and Chris.)