5 Ways Acting Stupid May Be Smart 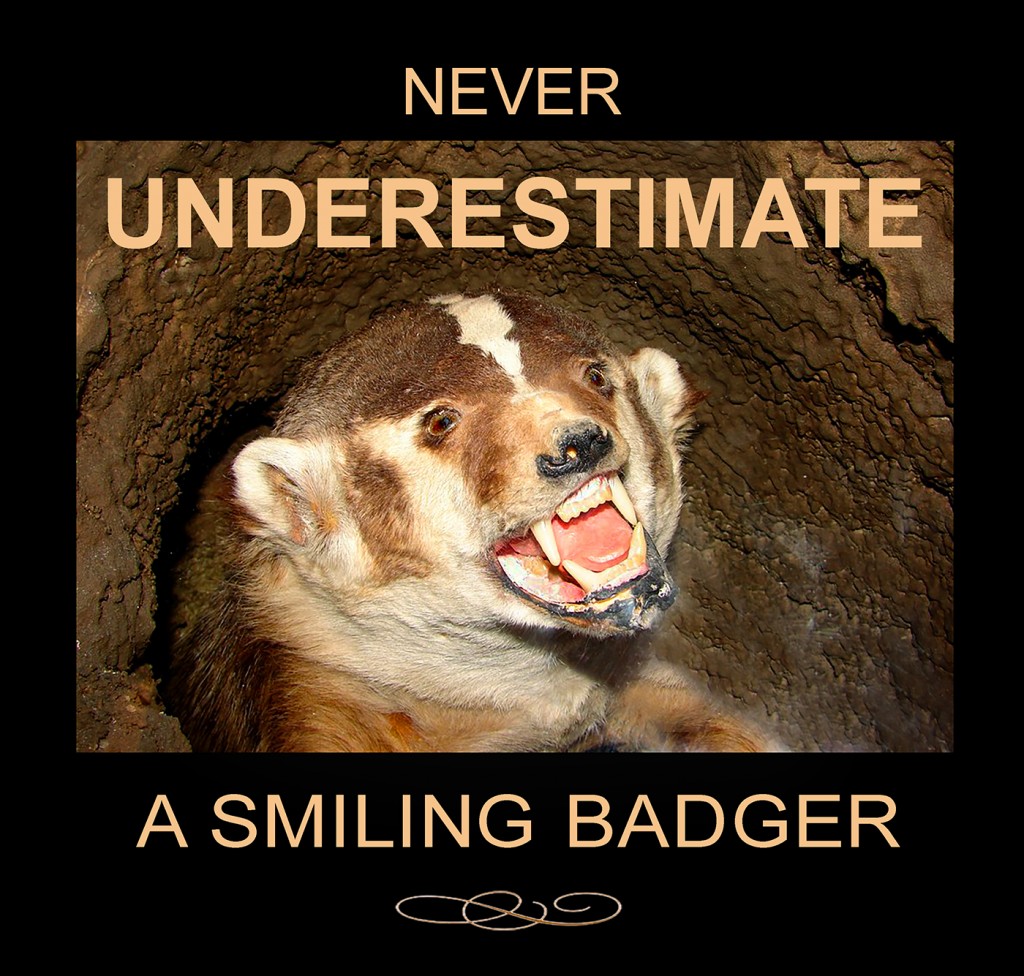 The other day my pops read an article about why highly intelligent people sometimes opt to hide their intelligence, and he asked what I thought. I stared at him for a moment, poured myself a coffee, ate half a yogurt and forgot the question.

I did a little research and here’s what I’ve learned:

1.  In a competitive situation it is often better to have your opponents underestimate you, which is especially useful if they are already likely to underestimate you for other reasons, such as being young, small, female or inordinately beautiful.

My editor is young, small, female and highly intelligent; on top of which she’s also gorgeous, so I know people underestimate the daylights out of her, which is as big a mistake as thinking the badger with foam dripping from its maw is smiling at you when you reach into its den to pat it on the head. The minute you think you’ve outwitted Samantha, and re-inserted some of the brilliant lines she has edited out of your book, you have effectively reached into its wee house and taunted the cute little badger (which btw is in the same family as the weasel and the wolverine), and you will draw back a bloody stump.

Samantha and the equally underestimated badger use their considerable skills to protect their young, and bend authors to their will. The badger and editor will one day rule the world. Mark my words.

2.  When dealing with an intellectually challenged authority figure it is often better to play dumb.

If you’ve ever had to deal with a teacher, boss or policeman who was an idiot, you don’t need to be Einstein to grasp this concept. It is never wise to point out the mistakes or shortcomings of an imbecile who holds your fate in his hands. Grossly stupid people tend to be proportionately petty and spiteful. Although it seems to go against the very laws of nature, it is impossible to outwit a moron, so another strategy must be employed in an effort to maintain order in the universe.

You may not be able to outwit him, but you can thwart a simpleton by carrying out his bad orders in a completely literal way. Next time your boss chews you out in front of the entire office and threatens to terminate you if you don’t get your ass in gear and “light a fire under the sales department,” well. Just make sure the sprinklers are working, then sit back in your cube with your umbrella, and let it rain.

3.  Hiding your smarts is excellent camouflage.

“The nail that sticks up gets hammered.” (Japanese proverb)

Tall poppy syndrome is a pejorative term used to describe a social phenomenon in which people of genuine merit are resented, attacked, cut down, or criticized because their talents or achievements elevate them above or distinguish them from their peers. (Wikipedia)

Budweiser syndrome is an accurate term used to describe a uniquely American phenomenon in which undistinguished and largely uneducated people wish to elect equally unremarkable officials with whom they would feel comfortable having a beer rather than choosing leaders who are really smart. (Pammy)

Throughout history there have been many instances where it would have been advantageous for the brainiac to keep her IQ on the DL. I’m guessing there were some mad smart gals in Salem back in 1692, working at the sackcloth shoppe, doing math in their heads and people were like, “No man can add that fast! She’s a witch! Throw her in the lake with a rock tied around her neck!”

Nowadays, at least here in the U.S., we extol wealth and excess, but only if it is achieved through hard work, the lottery or leaked sex tapes. Don’t go acting all Mensa when your stock splits and you’ve become a Fortune 100 company. Just tell people you’ve worked, like, really hard to get where you are. And then pretend to cry.

No one has ever been thrown into a lake with a rock tied around her neck because she was rich and stupid…pity.

4.  Playing dumb is an excellent ploy for finding out how much or how little other people actually know, and is an excellent way to gauge character and communication skills.

It’s the old “give ’em enough rope and they’ll hang themselves” strategy. I know a little something about writing, but I sit quietly by when some blustering Barnard announces he is a wordsmith. (I’ve yet to meet an actual writer who refers to her or himself as a wordsmith.) Another clue that I am not dealing with an actual wordsmith is the person’s inability to speak with proper grammar, and their rampant use of malaprops.

You soon learn that the only things the gasbag writes are text messages and poorly crafted emails–and that he lies about where he went to school pacifically because, for all intensive purposes, Harvard isn’t all its cramped up to be.

5.  Clever cluelessness can get you out of extra work.

Want to avoid extra assignments? Don’t wear your brains on your sleeve. Practice saying “I don’t know anything about that” while blinking as if you feel a stye coming on. If forced to undertake the task anyway because they think you’re really smart and just playing possum to avoid work, fail in such a breathtaking way as to ensure you will never be asked to do anything extra ever again.

In 1999, a couple of smartypants at Lockheed Martin were tasked with building yet another satellite for NASA. I’m not sure, but I think they were overdue for a vacay, and had had enough of hearing, “But you guys are so smart. Come on. Just one more.”

“Fine,” they said tersely in unison, and proceeded to build the satellite using the English system of measurement rather than the metric, which is what NASA uses. The use of two different measurement systems prevented the spacecraft’s navigation coordinates from being transferred from a spacecraft team in Denver to a lab in California. The orbiter was then lost in space.

Even I know that science uses the metric system for measuring stuff, so what kind of rocket scientists would build a $165.6 million Mars orbiter using the English system of measurement? I’ll tell you. Two guys who said enough is enough with the ‘just one more’ crap.

“Who’s smart now?” were their final words before departing for Aruba.