6 Toxic People To Run Away From Now 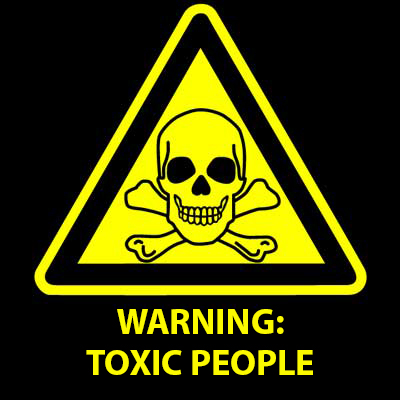 An article entitled Ten Toxic People to Avoid Like the Plague appeared in my inbox this morning. I clicked it fast as I could, fully expecting a list of people’s names, which could have been handy. Instead I got a list of toxic types: the gossip, the temperamental, the victim, the self-absorbed, the envious, the manipulator, the dementor, the twisted, the judgmental and the arrogant.

While I appreciate that someone compiled a list of poisonous personalities to run away from, I find it lacking (although I am enamored of the word “dementor” and plan to use it often and with abandon). Here’s what was overlooked:

Pretty much all parents think highly of their children so it’s a safe bet to assume when you start banging on about your elfin overachievers you’re setting other parent’s teeth on edge like a piece of aluminum foil hidden in a hamburger. I don’t care if Bimmer was accepted to Harvard before he was potty trained. My Alfie knows how to spell p-a-r-k and t-r-e-a-t, and he’s a dog.

When it comes to our children genius is totally in the eye of the beholder, which is where it should stay. After you get home from dinner you can gaze lovingly onto junior’s pudgy visage and tell him he is waaaay smarter than a dog. It will be a lie, but you’ll only be annoying the living crap out of Fido and not everyone at a dinner party.

The classic “disingenuous” is Charles Dickens’ sycophant Uriah Heep, notable for his cloying humility, obsequiousness and insincerity. “Oh, Master Copperfield, I am but an ‘umble’ man and you are so handsome and intelligent.” In today’s world Heep would open with, “Did you have a little work done? You look great!”

The character of Uriah Heep was based on a real life thief and forger who ingratiated himself to the Dickens’ family only to rob them blind once his bald flattery gained him access to the household. Apparently Thomas Powell told Mr. Dickens that he was a tremendous writer—that all other writers were losers—that Mr. Dickens had married the hottest Victorian supermodel in the world that no one had ever heard of before and that the Dickens children were classy and high quality people. Next thing he knew, Dickens was out $150K, all the silver candlesticks went missing and Tiny Tim had to do without the surgery that would have enabled him to walk sans crutches.

3. The megalomaniac.
Megalomania is a mental disorder in which the mind of the person is seriously broken as the possible result of a traumatic brain injury such as caused by falling off one’s gilded toilet onto one’s head. Megalomaniacs have an unrealistic sense of their own importance, popularity, wealth, power and significance, which is sweet soul music to the disingenuous.

Opposite the sycophant on the teeter-totter of dysfunction, the megalomaniac is easy to both manipulate and provoke. To bend one to your will you must only flatter and pledge undying loyalty, but their frontal lobe explodes when they are called on their shit. These are not philosophers or thinkers of meaningful thoughts, but they are oxygen to the flame of ass kissing and we better hope the two never converge in the White House. That would be #sad and #bad.

While my co-worker claims not to have known that the sandwich in the lunchroom fridge—in a bag with my name on it—wasn’t “up for grabs,” the law itself makes no allowances for ignorance (ignorantia juris non excusat), or in other words, I catch even a whiff of tomato, mozzarella, basil and roasted focaccia on your breath ever again, you are going down.

Sandwich skullduggery notwithstanding, I’m freaked out on a daily basis by the willfully ignorant’s ability to dismiss facts as something…disposable, like wedding rings or green cheese. Try as I might I cannot fathom a mental process by which, you know, evidence simply doesn’t effect decision-making, like the special kind of stupid it takes to touch a fajita plate even though you can literally hear it cauterizing the chicken. Just like the sizzling cast iron pan of death, willful ignorance will burn you in the end.

It is easier to discuss Kant with a cat than to argue with a troll although in both cases you will want to hack up a fur ball. I was recently blindsided by an exchange on Facebook that began civilly enough, but quickly devolved into what can only be described as visiting a Port-o-Potty next to a beer tent on the last day of a 10-day music festival during a heat wave when the curry guy at the international food tent has accidentally served tainted goat. In other words it was disgusting.

It’s one thing to voice opposition to a particular point of view or opinion, but to expend energy contriving vulgar non sequiturs in order to “get a rise” out of someone is like telling a rock it has a big ass and you don’t like its socks. The rock ain’t gonna change and the person talking to it remains an idiot talking to a rock.

Provocateurs used to be people who said and did thought provoking things usually associated with the arts and the loftier side of humanity. Much as the word “elite” used to be a positive adjective, we are suddenly swimming in a cesspool of co-opted verbiage. Elite is a dirty word while crass, vulgar and stupid stand in for “of the people.” Internet trolls know they don’t have to put any thought into their invective—as long as it’s base, ugly and vile it serves its purpose, which as best I can tell is to further strip humans of their distinction from rocks.

Compared to the pulchritudinous people in items one through five, this one, #6, will get you killed.