7 Reasons My Dog Should Be A Presidential Candidate 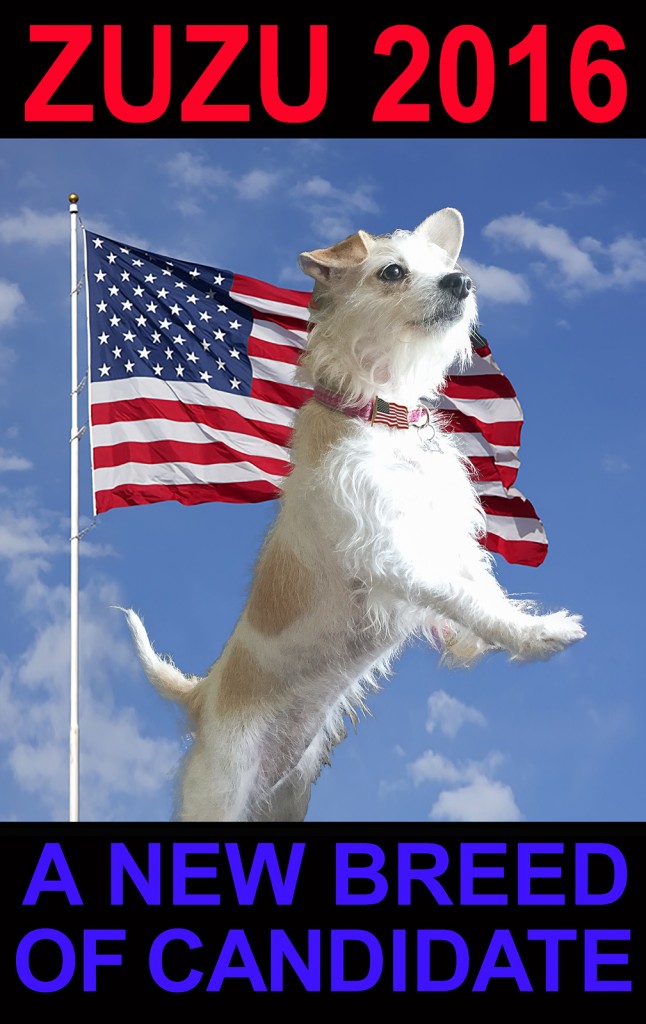 1.  Zuzu is a straightforward communicator.

At her most vociferous, such as when a deer, wild turkey, postal carrier, door-to-door religion salesperson, chipmunk, squirrel, robin, bunny, leaf or twig appears in her yard and she howls like a shewolf in heat, her oratory is still not as shrill and bombastic as the majority of other candidates when they open their mouths.

While Zuzu occasionally barks at the wind, she would not say something just because pollsters have told her it’s what you want to hear. If anything, Zuzu is honest to a fault. If you’re cruel, mean or have liver sausage in your pocket, Zuzu will call you on it.

2.  She would not embarrass herself, or the American people.

Although she may eat deer poop and lick her own private parts in public, she is still more dignified than most of the others. To be fair, she will kiss babies, but that is only because they usually have food on their faces.

She won’t go full dork and lamely pitch the first ball at a baseball game. (See “she has no thumbs” below.)

Zuzu would not engage in an any discussion about paw size or whether someone’s wife is a dog. (I mean, seriously. She was incensed by that one.) A firm believer in a bitch’s reproductive rights, she has proudly been spay, but would never disparage someone else’s lifestyle choices, even if they had a litter out of wedlock or named their children after math functions and trees.

3. No doubt about it, Zuzu would 100% warn us if a bunch of Wall Street bankers were about to rob us blind.

As a founding member of the Dogalist Party, Zuzu does not believe might makes right, but if Bernie Madoff or the marauders at Goldman Sachs had come to our house, Zuzu would have bared her teeth and growled like a cornered Chiweenie, while quite possibly soiling their $1900 Ferragamo loafers at the same time. Our politicians swept open the door and bowed while the Wall Street crooks waltzed into the bank and took everyone’s money without so much as a warning arf.

Zuzu will sleep with one eye open, just waiting for the criminals at Morgan Stanley and their BFFs at the SEC, to walk past her cedar chip beddie. (A cup would be a wise investment, fellas, as she’s likely to go straight for the nads.)

She doesn’t make assumptions about people based on skin color, income, the car they drive, the religion they do or don’t practice, sexual orientation, gender, culture or whether they prefer dark or milk chocolate. She takes one thing and one thing only into account when assessing the quality of a human being, and that is their smell.

Zuzu could march straight into the U.N., nose twitching, and immediately know who to trust, and who was likely to pull a Ukrainian invasion, test a nuke, or cheat on his #3 mistress.

When her tail is wagging and she is smiling, Zuzu is genuinely happy, and would bring the country its slippers, curl up on its lap, and charm the pants off international leaders at State dinners by wearing a plain cloth coat from Petco, and serving farm-to-table kibble.

If, however, an opponent were to disparage Zuzu’s humans, make fun of the fact that she doesn’t know who her parents are, where she was born, or because she was homeless on the streets of L.A. for a time, her ears would go back and her eyes would narrow to steely slits, and she would take away his liver treats until his behavior had improved.

She cannot hold nor fire a weapon, but she can still give hugs. She cannot perform the gag-inducing “thumbs up” gesture that, no natter how asslike it makes them look, every single politician does regardless of age, party or fitness to hold public office much less go around indicating everything is hunky dory.

She cannot place her thumb on the scales of justice, but would treat everyone with the same even handedness.

7. She finds the goodness in nearly every situation.

If there’s one square inch of sunshine on the floor, Zuzu is in it. A candidate who knows how to follow her bliss is more likely to lead us in the right direction.

Unless you are a cat, Zuzu does not care what you do in the privacy of your own home. (She only cares about what cats do because she doesn’t believe for one second that they are really that independent, and eventually, Zuzu believes, they will be found out.)

It is time for a tail waggin’, butt sniffin’, happy, sappy little dog to make the rest of the world smile, and think of Americans once again as a well-adjusted, well-behaved people, not a bunch of bitter contestants in a reality show on a crap planet.