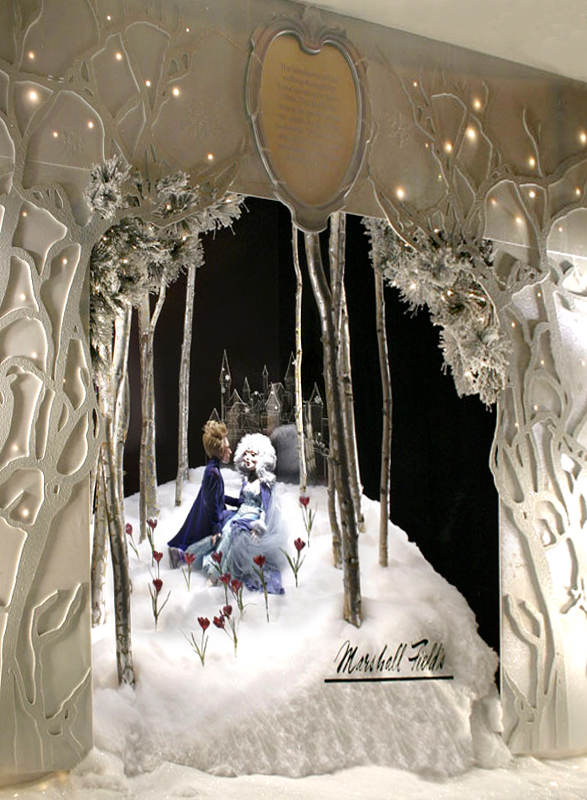 When I was a kid, on the day after Thanksgiving my mom and dad would take me to Chicago to see the Christmas lights and decorations on Michigan Avenue. I felt like a grown up in the bustling big city, bumping into ladies in high-heeled boots and fur coats, and men carrying stacks of big department store boxes and fancy-looking shopping bags. The men wore overcoats, galoshes and felt hats. I was accustomed to guys in Milwaukee being more casual, and mostly wearing hunting outerwear and plaid flannel hats with earflaps.

On State Street, Marshall Field’s had the best window displays ever, with animatronic elves, reindeer, Santa and Mrs. Claus, and princes kissing the noses of princesses in an enchanted flocked forest. Although primitive by today’s high-tech standards, the mechanical creatures moved with convincing agility. I can only imagine what I looked like from their perspective—a little girl, mouth agape, wide-eyed and mesmerized.

Inside, the store boasted the famous seven story “Walnut Room Christmas Tree.” I tried to Google the exact height, because seven stories seems awfully tall, but my mom confirmed it was 70 feet, and we are sticking to that memory story.

Just when I thought it couldn’t get any better, we’d stop for lunch at The Berghoff, an old school wood-paneled restaurant dating back to 1898, when it began as a men-only saloon that served free corned beef sandwiches with the purchase of a stein of Berghoff beer. The place would be packed with people that looked to me to have stepped from the set of a movie—elegant, sophisticated and perfectly coiffed. I was accustomed to camo snowmobile suits and boots.

It was a rarity to see a taxicab in Milwaukee, and Chicago’s El was beyond compare. Everything about the big city—the cultivated people, the cabs, the crowded sidewalks and tall buildings, was spellbinding.

Maybe we all become jaded as we get older. I’ve traveled all over the world and seen things I couldn’t have imagined when I was a child, but I also think people have forgotten about magic. Magic isn’t getting up at 3AM for a door-buster sale. Magic is putting on your nicest clothes to go window-shopping.

We didn’t have a lot of money, and things were way more expensive in a big city like Chicago. But we went into Neiman Marcus and Saks and Marshall Fields because they had the most incredible Christmas decorations. It smelled special in those places, too—different than Gimbels and Sears, and Goldmann’s, on the south side of Milwaukee. It smelled like magic, although it was probably just Chanel #5 and Aquanet.

I realize that the world has changed a lot since I was a child. In almost all cases both parents must work in order to support a family, and finding a good deal on Christmas gifts, if you’re lucky enough to have any disposable income at all, is an essential part of the holiday season. I can honestly say that I do not remember a single Christmas gift from my childhood, but I can recall as though it were yesterday how I felt when we went to Chicago to look at the decorations.

Maybe the real “gift” was the fact that my mom didn’t have to work, and my dad closed down his business for the full four-day Thanksgiving holiday. We could afford the gas to drive to Chicago, the parking, and the lunch at the Berghoff. I’m sure someone bought something while we were in Chicago, but I don’t remember any of that. The experience, however, stays with me to this day. I can afford Chanel #5 now, and more than a love of the fragrance itself, I remain transformed by the memories it conjures, and how lucky I was when the day after Thanksgiving was magical.