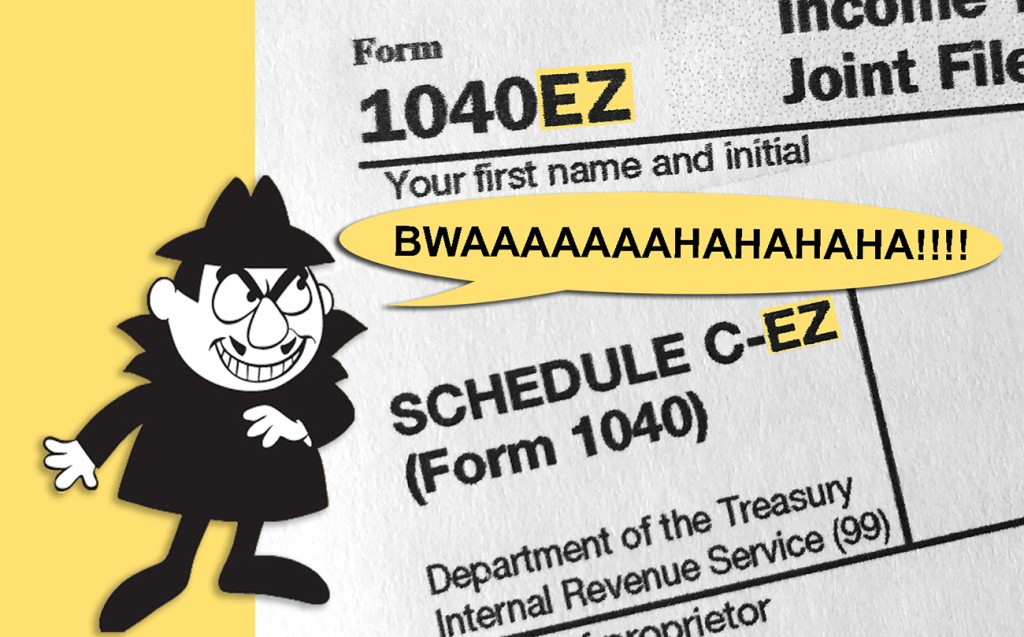 This year April 15th shall go down in history, for me, as the end of the world as I know it.

In the past, I used an accountant to do my taxes. Self-employed as a TV commercials director, writer, producer, photographer, and media consultant, there were just too many variables for me to take on the IRS all by my lonesome. But this year, all I had income-wise were proceeds from a brand new photography business and books sales from my novel. (Uh, you guys have to schedule more photo shoots and buy more books. Seriously. I honestly didn’t think I needed help tabulating my “income” this year.)

Au contrare, Pierre, as they say in I-see-London-I-see-France. This, from the IRS website, “If you made or received a payment as a small business or self-employed (individual), you are most likely required to file an information form with the IRS.” In essence, if someone paid me $5 for taking a photo of his dog with my iPhone, I must file a separate tax return in addition to my personal income tax return.

Knowing full well that the thought of filing taxes turns mortals into Jello, the charmers at the IRS have devised this thing that is meant to sound helpful. I say “sound helpful” because there could be no way for an actual human to believe this thing is actually helpful. The thing is a form to which a government clerk has added the letters EZ, i.e. forms 1040EZ and Schedule C-EZ.

One would think the letters EZ are meant to indicate, oh, I don’t know, a procedure that by comparison to brain transplants and speaking Lithuanian with a high degree of fluency might be construed as EASY. EZ. See what they did there?

I foolishly set aside two days this week to do my taxes. My Uncle Ivan was the bookkeeper for our family’s advertising photography studio, and he drummed it into my head to save every receipt, annotate all paperwork with excessive detail, keep records of any transaction in triplicate (including dry cleaning bills even though one would never dream of deducting such an expense unless the clothing had been soiled during a work-sanctioned food fight with mandatory attendance – we did, after all, work in advertising), and assume accountants from the government would terrorize you if the corporate checkbook wasn’t balanced to the penny.

One wouldn’t normally place the word “terrorize” in the same sentence with the word “accountant,” a term more generally associated with the phrases “date from hell” and “I’m sorry, I fell asleep. What did you say?” But these are the Feds we’re talking about.

Fully aware that the term “accountant” may not cast quite enough fear into the hearts of American citizens and others who pay U.S. taxes, the federal government has bestowed upon their “accountants” a more fitting and ghastly title—agent.

I don’t care how old you are or where you grew up, when you put the word “agent” in the same breath as the word “government” you’ve pictured a sinister man in a raincoat whose goal in life it is to do you harm. I believe, verbatim, this is in fact part of the actual job description of the IRS agent.

It was demoralizing to discover that in spite of my record-keeping—a feat of human organization and skill unmatched by anyone whose uncle was not Ivan Ferderbar, I would be unable to fathom the instructions for filing my taxes.

I’ve read Finnegan’s Wake—an experimental novel with no clear plot, of approximately a million pages, single-spaced in a tiny font—that is written all stream of consciousness, consisting of idiosyncratic language, i.e. quirky strings of words that you wouldn’t exactly call “sentences,” based on free association, and that as best I can tell, is an attempt at capturing the feeling of dreams—and not the ones you remember or can fly in. 77 years after it was published, Joyce scholars still can’t agree on what it all means, but they unanimously concur it is easier to read and understand than form 1040EZ.

I tried calling the IRS Helpline. Only government agents, i.e. sadistic psychopaths, would have the audacity to use the word “help” to describe a thing (you can’t really call it a function as it lacks purpose) that is actually 100% a hindrance. They should call it the IRS Ironyline. Or Glitchline. Make up your own name for it. It’s a better use of your time than calling the number at 10AM (CDT) on Monday, April 11th, only to get a recorded announcement telling you the office is currently closed, and to call back during normal business hours, defined as Monday through Friday, 7AM to 7PM. (The message did not state whether this was central daylight time or Martian winter hours, but 10A (CDT), no matter how you slice it, falls within any definition of “between 7Am and 7PM” anywhere in the contiguous United States, except for maybe a place in Texas where they believe the earth was created 6,000 years ago and Christian people rode domesticated triceratops to work.

My guess? Just like in a cartoon with a squirrel and a moose, a diabolical yet small man wearing a trench coat came into work at the IRS at precisely 7AM on Monday morning the 11th of April, 2016. He reached for the “off” button on the office answering machine, but his finger hovered, not quite disengaging the device. A sinister smile crept across his oily face, making his pencil mustache go up at the outer edges, like evil punctuation. He left the answering machine on.

“BWAAAAAAAAAAAAHAHAHAHAHAHA,” he exclaimed, before sitting down at his desk and determining whom he would like to audit next. Then he grabbed a folder with the letter F on its cover, and opened it to the name Ferderbar.