Duck! And other advice from my mother 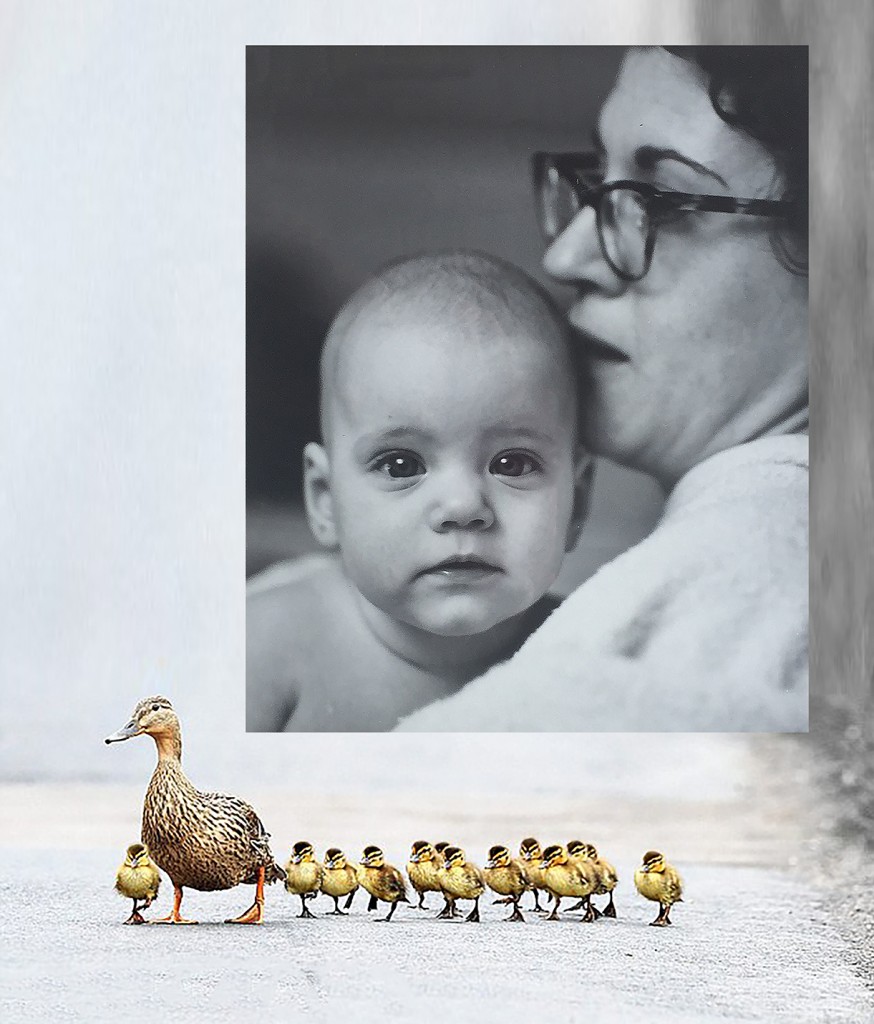 The quintessential symbol of motherhood is a mama duck being followed dutifully by her chicks, waddling across perilous terrain, facing imminent danger, until reaching the safety of a pond or lake.

It is the stuff of lore. Brave calendar-worthy firemen with yellow hats and axes, slipping into sewer drains to rescue wee birdlets that have fallen through the grates. Burly truckers and ornery cabbies, halting traffic so that a mama mallard and her brood may safely cross a busy street. In the face of mayhem, murder, war, pestilence, famine, sand tar conflagration and political meltdown, there is always time for a “mother duck and her chicks story” to remind viewers there’s more to life than mayhem, murder, war and all the other stuff that boosts ratings. In network parlance, duck stories are the goose that lays the golden egg.

I think I was about five years old when my mother decided it was important to teach me evasive tactical maneuvers while she was driving and I was a passenger in the front seat of our Rambler. I don’t know what model it was, or what year, but the Rambler was old, white and had a tan interior, like my Uncle Ray and certain American politicians.

There was a lot going on the world – the war in Vietnam was limping toward its conclusion, clothing designers were mass producing tie dyed couture, Diana Ross was fixin’ to leave the Supremes, and in West Allis, Wisconsin, my mother was going to be sure I was prepared for any foreign or homegrown danger.

The first time it happened we were driving along Greenfield Avenue, en route to South 78th Street where we lived in a little duplex with my maternal grandma. It was a summer day. The car windows were down. We were young and happy when my mother suddenly yelled, “DUCK!”

Naturally, I sat forward on high alert, scanning the road for a domestic waterfowl in our path. My mother slammed on the brakes, looked at me incredulously, and told me that when she said “duck” I had better duck.

“What is happening?” I asked.

“Anything could happen,” she responded.

Huh. Guys had already walked on the moon, the Stones had killed on Ed Sullivan and The Brady Bunch brought us our first taste of the blended family. What was left? We turned onto Becher Street just up the block from our house.

I remember it like it was yesterday. Me, turning in slo-mo toward my ma, the word just forming…”Wh…” when smack! She thwacked the back of my head and said, “When I tell you to duck, duck!”

I blinked. “Why?” I asked, completing my original thought while checking to see if any teeth had come loose.

Exasperated, my mother reminded me that “anything could happen,” and it was for my own good. I rubbed the back of my head and was hoping Beverly Grossman was out when we got home. It was amusing to watch her pick caterpillars off the maple trees and eat them.

That night over a dinner of fried ring bologna and burnt lima beans, my mom expressed her frustration that I was a poor ducker to my dad.

“Anything can happen these days,” my mom told him, adding, “by the time I explain it to her, it could be too late.”

My dad looked away for a moment. He looked sad. So did my mom. Even though it had been years since it happened, people still talked about the young president that had been killed, and how the world would never be the same.

This ducking business went on for a long time, always with the same result. I was obstinate, plus I liked danger. I once ran headlong into our kitchen door believing the incantation “romper stomper bomper boo” would enable me to teleport onto the set of Romper Room where I would replace Miss Nancy as the host. That did not work, either. Grandma Teuber found me sprawled on the linoleum, out cold.

In spite of multiple head traumas that should have served as a warning to me, I never caught on to the actual reason for the whole ducking affair until I was in my 30s. (For those of you who don’t know me well, this was just recently.)

Anything could happen. A young, vibrant husband and father could be riding along in a convertible one day, his lovely wife at his side, with what seemed an entire nation looking on in genuine affection, when in one split second it ended. He ended. They ended. And the idea that anyone just riding along, no matter how dearly beloved, could be ended.

All my mom had hoped to do was deliver me safely to the water’s edge. On this Mother’s Day (and every day) I want to thank my mom for everything she has done for me my entire life, but most especially of all, for her ducking love.