How the Rich Are Different from Other People

Lately I’ve been seeing a lot of articles on this subject, and I am amazed that anyone at all feels the need to itemize, explain, elucidate and otherwise point out how rich people are different from people who are not rich. For one thing, and it seems rather obvious, rich people have more money. This is usually evident in the following ways:

I couldn’t help but notice there is a dearth of reading material entitled, “How the Poor Are Different from Other People.” I think that is because far more people associate themselves with being poor than consider themselves rich, and if you’re looking at the other side of the tracks you want to at least see a Maybach parked in the driveway, or the Christian Louboutin deliveryman offloading boxes of red-soled stilettoes at the back door.

No one is clamoring to hear how difficult it is to make ends meet—pay the rent or mortgage, finance the kid’s braces, or set money aside for college, weddings or the family vacay to Wally World. And to be honest, these are not really the concerns of “the poor.”

The poor have much smaller fish to fry, if they have anything to eat at all. When you don’t know where your next meal is coming from, whether you will have a roof over your head next month, or you rely on charity for winter shoes without holes in the soles, then the idea that the rich live differently from “the rest of us” takes on less significance than the possibility of life on Mars. It’s the here and now – right here, right now—that commands your full attention just so you might survive another day.

I’ll admit there’s a certain appeal to comparing myself—my “poor” self, to someone who is rich—rich by popular culture/reality TV standards. But when I feel a twinge of longing for a stadium-sized closet filled with designer clothes and accessories, a seat on a Gulfstream G650, or to own a private island, I experience a slightly stronger pang of guilt over the fact that I must force myself to feel hungry on occasion in an effort to lose belly fat, and even then I usually give up and tuck into a fully stocked pantry for some abundantly satisfying snack, such as Popchips sea salt potato chips or Trader Joe’s organic popcorn with olive oil. I’m fairly certain actual poor people do not have pantries.

We’ve all heard about trophy wife bonuses, safe rooms, mega super yachts and the hunting of endangered animals, but to a lot of people, buying a Starbucks latte might as well be a $180,000,000 Picasso. Perspective is everything. A person needs a glass before they can answer whether theirs is half empty or half full.

US Weekly has a section devoted to the similarities between the rich and famous, and you and me; Stars! They’re Just Like Us! 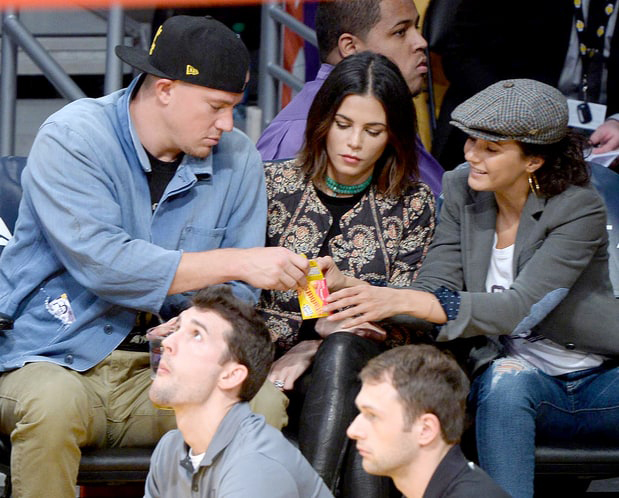 Perhaps Channing Tatum and his wifey can afford $2500-$7000 each for courtside Lakers tickets, or maybe they were a gift. Either way, most people can’t spend in excess of $5,000 on date night ($6,000 if you count nachos and beer at the Staples Center).

As one would expect, I have a theory about our cultural desire to compare the way we fare to how “the other half” lives, which everyone knows is actually 49% less than an actual half. We can’t bear the thought of so many people having less than what they need to survive that we numb ourselves to the inequities by pretending we are hard-done-by ourselves. If having a $35,000 Birkin bag means a person is rich, than by comparison I am poor, and if I am poor, with my pantry and warm bed and winter boots, then poor people are doing just fine. But in our heart of hearts, no amount of Botox, Birkin or Beverly Hills is going to convince us that’s true.

Maybe once a month, instead of buying a $5 magazine that tells us how similar we are to the rich and famous, we could drop a few bucks into the poor box at church, or at Goodwill, Purple Heart or the local food pantry, and try to soften the line between us, and the truly less fortunate. CharityWatch.Org