How to Accept a Compliment (when you’re from Wisconsin) 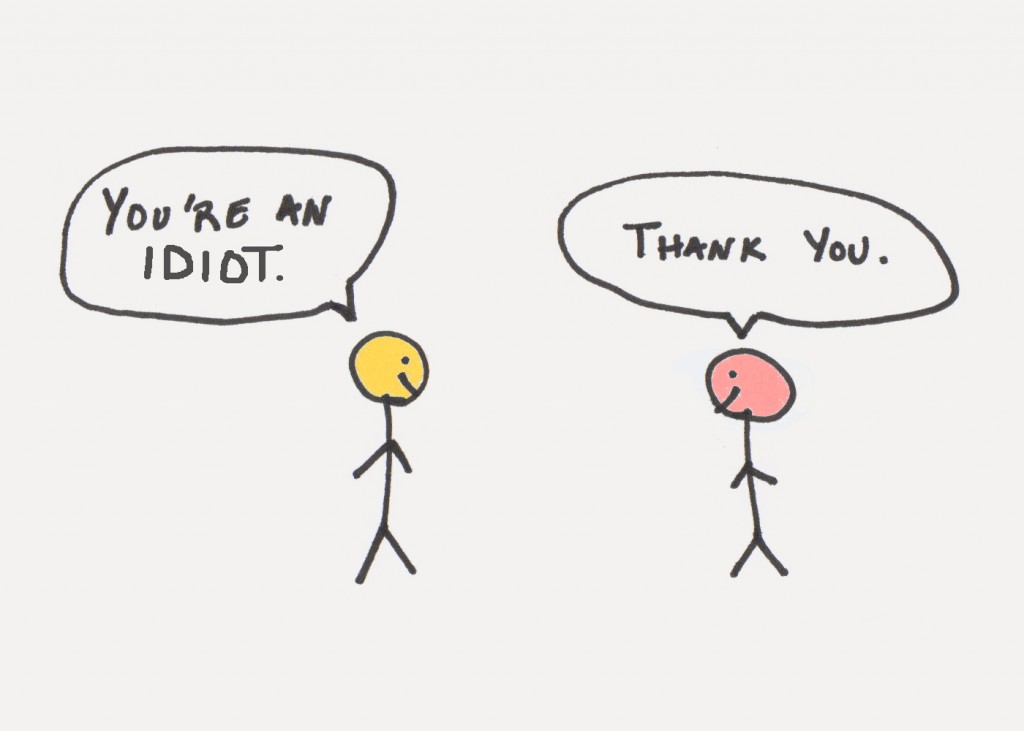 After 20 years in Los Angeles this has taken some getting used to—the humility, the big toe in the dirt “aw shucks, who me-edness” of the Midwesterner’s response to a compliment. In L.A., for example, when someone says, “You look nice today,” the reply varies from “Juvederm” to “I just did a six-month kale/kefir cleanse. My knees look thin, right?”

In Wisconsin, when someone tells you, “You look good today,” the response is almost always, “Really? I had like three sixers, a dozen brats and an entire Racine almond Kringle last night. I don’t look a little bloated?”

The other day a friend thanked me for doing her a favor, and rather than simply saying, “You’re welcome. I’m glad I could help out,” I said, “It was nothing. No trouble at all. Hardly worth mentioning.” I had devoted six hours to helping her because she inadvertently mistook a powerful opioid pain killer for her daily multivitamin, which rendered her incapable of driving herself to the eye doctor (which clearly was an overdue necessity), which in turn, due to the dilating eye drops, rendered her legally blind in addition to being high as a kite.

After the eye doctor we went to the pharmacy and then grocery shopping for the weirdest combo of food items ever, highlighted by a conversation that was repeated several times; Me: “Get out of the cart.” She: “Weeeeeee! I’m a banana!”

Why do Midwesterners eschew praise like it’s fat free ice cream when in other parts of the country people just say a big hairy “thanks?” For one thing, we suffer from an affliction known as “the Midwest Humble.”

Some historians believe the Midwest Humble traces back to 19th century England, the writer Charles Dickens to be precise, and his obsequious, humility-dripping character, Uriah Heep, whose “umbleness” was a means to make other people feel important. Heep’s sycophancy was a way to gain people’s confidence, making him the original “yes man.” In David Copperfield he explains his smarminess thusly, ‘People like to be above you,’ says father, ‘keep yourself down.’

Wisconsinites know no one is ‘above us’ when it comes to football, cheese and liquor consumption, and yet we Uriah Heep ourselves into a sinkhole of “umbleness” every time someone says we have good teeth. Why can’t we just say, “you betcha” when a Coloradan accuses us of being cheeseheads? “Damn straight” when some dude from Oregon points out we have the highest cholesterol in the world? And “I’ve been thrown out of better places than this” as a Kewaskum bouncer forcibly removes our personage from a local watering hole?

Following are a few tips on how Midwesterners can graciously accept a compliment in an authentic and convincing way.

The thank you add-on.

Suppose someone says, “Yours is the best tater tot hot dish I’ve ever tasted.” The person eating Midwest Humble pie would pooh-pooh such high praise, electing instead to say, “Aw hell, everyone knows Junie Zimma is the queen of the casserole in these parts.” That would be so wrong. Instead try, “Thank you. I know fifty ways to kill a man with a Yukon gold.”

The “add-on” is disarming, charming and just a teensy bit off-putting—like calling a drinking fountain a bubbler, and over-the-shoe rain boots, “rubbers.”

Embrace flattery then walk away quickly.

Next time a friendly person stops to admire your Christmas sweater, resist the urge to declare, ”It was on clearance at Kohl’s, plus I had two dollars in instore credit, there was a coupon in the Sunday paper, and I found a quarter on the sidewalk. This thing cost ten cents.” Rather, try, “On anyone else it would look absurd, but I’ve got the temperament and the height to pull it off.” Then pull it off, toss it to the floor and sashay away. They will remember you. Not your clothes.

When your friend says you look good in a new pair of jeans, don’t point out how big your butt is, how you can’t eat while you’re wearing them, or that you paid, like, two bucks for them at Kohl’s. Instead, lunge forward, throw your arms around her in a suffocating full nelson, and say, “I lost four ounces this week!” Then kiss her husband on the mouth.

I once attended a director friend’s movie premier where I was seated toward the front of the theater. The film was in the top two all time worst films ever made in the history of cinema. And it was long, too. A would-be thriller, this flick had fewer thrills than a four-part porridge documentary.

The director and his wife perched in the back row. There was no hope of escape without being seen. Every so often I glanced over my shoulder to see whether they had perhaps stepped out, but they stared straight ahead at the horror (unfortunately not the scary kind) on the screen. Once or twice, they looked like they were about to leave, and I tensed my thigh muscles in preparation for leaping up and dashing out. But they were just shifting their weight. The movie had put their butts to sleep.

When finally, mercifully, the thing ended and I raced for the exit, my director friend stepped in front of me, blocking my escape. “You are talented, smart, beautiful and kind,” he told me.

“Uh, thanks,” I said, trying my best to beat the Midwest Humble rap. Then he came in for the kill. “I want your opinion of my film.”

I had been all big girl pants, and said, “thank you,” and not a word more when he paid me a compliment. I was nearly home free, wearing self confidence and bravado like a twenty dollar sweater. Now I was faced with the most virulent Midwestern affliction of all; the absolute need to be truthful at all times. Sweet baby Jesus, when he said all the nice stuff, why hadn’t I muttered, “My ass is huge, I will never master Mailchimp and one time I did not stop to help a half-dead pigeon off the freeway during rush hour. I still feel that,” then run like a mofo for the exit? No, I stood there like someone from California and said, “Thank you.”

Now tf what? I thought about the 90 minutes I sat in that theater (three hours of my life that I will never get back), and how devoutly I prayed for an opportunity to present itself where someone would create a diversion during which I could zip out the door. And then it hit me. I am self confident, smart and kind.

“I was on the edge of my seat the entire time,” I told him.

“Thank you!” he shrieked. Being from L.A., he had no qualms about accepting a compliment.

Thank you for reading this. XO