Magic…When You Need It Most

Reminiscing the other day about holidays past, I became a bit wistful and blue, thinking that the stuff of sparkly memories was reserved for the very young—the uncrushed, unwrecked, and unsullied by mean people, disappointment, life. Then the most amazing things started to happen.

I went shopping right before Christmas. (My cousin Melanie has all her gifts purchased and wrapped by mid-summer.) As I drove to the mall on December 23rd, I made up ways to kill Melanie that involved curling ribbon and scotch tape.

Filled with dread I swung into an overflowing parking lot and immediately found a spot at the very front, nearest to the entrance. I got out of the car and a young man walking by turned to smile at me.

“Happy holidays!” he said, tipping his hat. Full disclosure: he did not tip his hat in an old school sexy way like Bogie might have done. Or Ol’ Blue Eyes. It wasn’t that kind of hat. He was wearing a sort of Tyrolean deal with flaps over the ears and a pompom on top, but he tugged an earflap as he wished me well, and I’m counting that as a courtly gesture.

The whole shopping excursion was actually…not bad. Maybe it was because we hadn’t had a mass shooting or a new war in a few days, and people were feeling carefree, and therefor pleasant to deal with. Children behaved. Adults were cheery. Store clerks couldn’t have been more helpful or friendly. I grew worried. Had I been abducted by aliens in the moments that I blacked out as I was bleaching the grout in the shower?

My efficient and lovely cousin Melanie had organized a bowling tournament for Christmas Eve, and all the family showed up for kegeling hijinks. We’re not normal by most standards, and when I pay attention I discover that we laugh a lot more than other people. Our family crest is a set of wind-up chattering teeth.

In the sport of bowling there are winners and there are losers, and when the person who set the thing up partners with the best bowler in the Midwest, well, the fix is in, but even that didn’t derail the holiday. Everyone gave Melanie a nice pat on the back as the official “winner,” (mine was more of a solid thwack that caused her to swallow her gum) and off we went to her house for more togetherness.

Usually I am behind my camera, chronicling family gatherings for future generations, but I left my camera at home and decided to be fully present this year, instead. Watching people when they don’t realize they’re being watched tells you a lot. The faces of the children beamed with anticipation and excitement, while the adults watched them with a delicate blend of indulgence and nostalgia.

While the littlest girl gleefully opened a great big package, barely able to contain her exuberance, I noticed my mom’s fingers mimicking the tot’s, as if she were unwrapping something wonderful herself.

How I wished we could all see the world, if only for a moment, through childlike eyes again, erasing the doubts, fears and insecurities we have as grown ups.

Christmas day we gather at my parent’s—my precious-at-any-age godson Chad (who is now in his early 30s) comes with Nolene, his astoundingly wonderful girlfriend of several years, and an assortment of their friends. As a bonus this year, Nolene’s brother Andre was visiting from South Africa, and he rounded out the entourage. All of my cousins and their children, husbands, wives, and significant others fill the house with noise, hugs and laughter. We had invited my folk’s neighbors Steve and Robyn, and their friend Paul to join our loud and crazy family, and with their arrival the house was officially rockin’,

After the silly White Elephant gift exchange, in which my mom’s “The Clapper” was the gift to beat, I began gathering up paper plates, empty cups and bits of wrapping paper. Chad stood up and announced he had something to ask Nolene. My heart skipped a beat. We adore Nolene. Could this be “the big question?”

Chad reached into his back pocket and dropped to one knee. I glanced around as it became apparent what was happening. The room had fallen silent for the first time all day; the atmosphere charged with thrilled electricity. Chad produced a small box with a glorious diamond ring inside, and he asked dear Nolene to spend the rest of her life with her hand in his. She said yes. Judging from the expressions of wonder and unmitigated joy on everyone’s face, it was the closest thing to childlike awe that I could have imagined. For the moment.

(Note: always keep a bottle of champagne chilling in the fridge. You never know when you’re going to need it!)

We popped the cork and toasted the young couple, wishing them well on this new chapter of their lives. There was an abundance of hugging and crying—hand shaking and pats on the back were not sufficient to this milestone at all. The children danced around like Druids, trailing bits of ribbon, and whooping their gladness for Chad and Nolene.

My parent’s neighbor Steve is a magician, a detail I had forgotten, but which became magnificently clear when he enlisted the two youngest to be his assistants for…The. Greatest. Magic. Show. On. Earth.

I could describe in great detail the fantastical sleights of hand, card tricks and voilas! that captivated us that day, but there are no words to convey the actual magic that transformed each of us into a five-year-old, to whom the world is still an enchanting, happy and profoundly wonderful place to live. How perfect then, on the very day that Chad and Nolene reminded us “love is all you need” to be blessed with a remedy for cynicism and adulthood. My blues, wistfulness, and doubts were replaced with all the wide-eyed wonder of a child, and tremendous gratitude for this great gift called life.

My wish for you all in the New Year is that you find that little bit of magic just when you need it most. 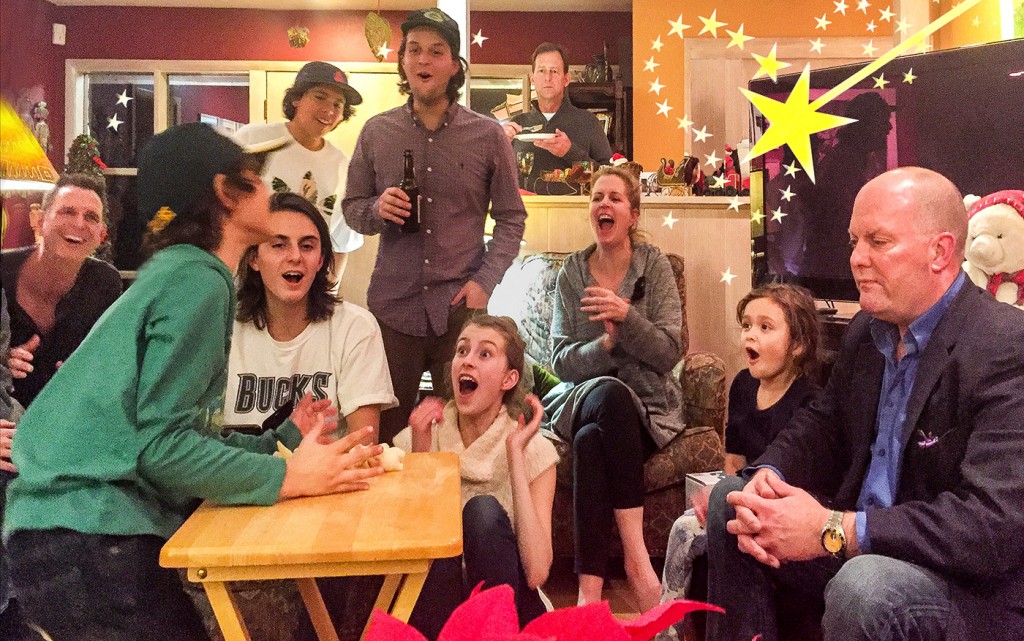 Don’t miss a thing. Subscribe to my blog now!