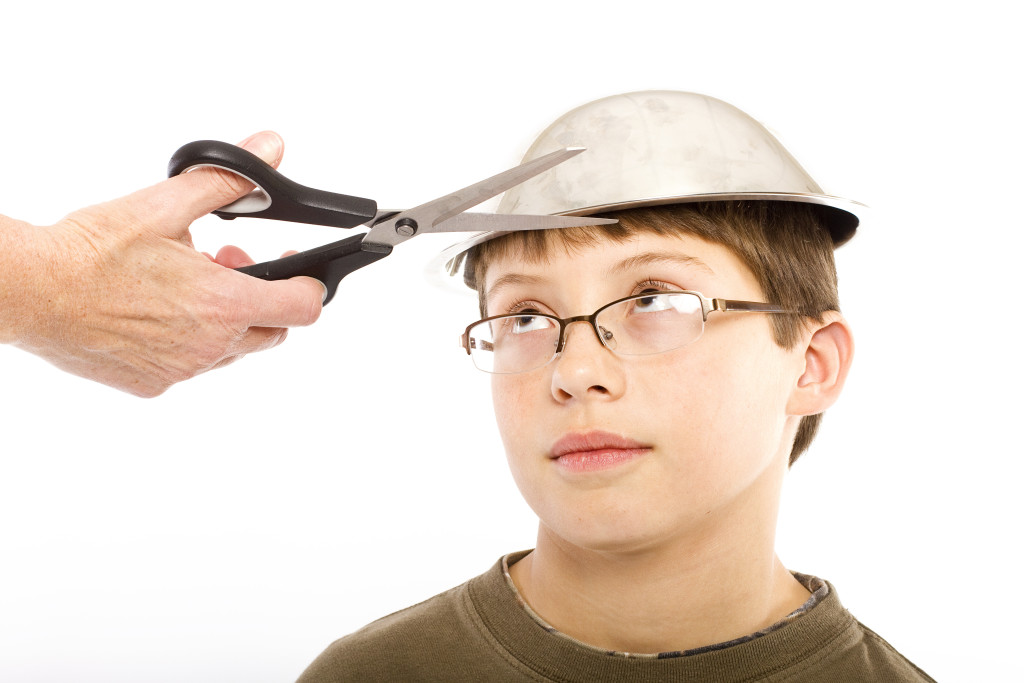 Alfie, a three-legged rat terrier mutt with six teeth and his tongue lolling out the side of his mouth, has taken to lunging at my husband and attempting to bite his (well, gum really) face off when he tries to kiss me. It is super cute. Also tres adorbs, I have never seen my husband ambulate so quickly.

My cousin Melanie Bekos’ children are home from college for the rest of the semester. She looked at son Jack’s flowing blonde locks yesterday and volunteered to cut his hair. “Do you know how?” he asked. (I imagine he almost imperceptibly cocked his head to one side as a lone eyebrow went up a fraction of a fraction.)

This is a woman he has literally known his entire life, but who is so stealthy and tight-lipped that Jack thought for a nanosecond she might just possess a fantastical life-altering skill, with a very high degree of difficulty and equally vast margin of error, of which he was previously unaware. Melanie is the executive director of the Wisconsin Chapter of the ALS Association. When not performing bowl haircuts on innocent victims, she reminded me that people with ALS and all terminal diseases are having a particularly difficult time during this pandemic. Please donate whatever you can to those who are worse off.

My godson Chad and his lovely wife Nolene gifted us an iRobot Roomba for Christmas. How I love him! (There is no doubt in my mind that Roomba is a boy.) He’s a good little fellow dutifully collecting every crumb and hair on the floor. When he gets stuck, he doesn’t yell “Paaaaaaam!” like some others (especially when Paaaaaam is in the bathroom). He chirps, and then a woman’s voice announces in dulcet tones, “Roomba is stuck.” Roomba and the lady inside of him are telling me “don’t hurry. Relax. We’ll be patiently waiting for you until you find the time to unstick us. Go on, do what you were doing. Finish that chapter. Or the large pizza you made from scratch and are eating in the attic, so you don’t have to share. We don’t mind. We are here for you.”

Pet hair is my pet peeve so I was both hopeful and skeptical when I saw an ad on my Instagram feed for the Chom Chom Roller. How on earth they knew I had a thing about dog hair is beyond me. I mean, I get why I am inundated by solicitations and sexy ads from Stuart Weitzman, TJ Maxx and Sweaty Betty (their butt-lifting work-out pants do the work so you don’t have to), but that I was included among the lucky people to learn of this miraculous device on social media can only be chalked up to voodoo.

My lint roller habit was setting me back about a grand a month even though the dogs aren’t allowed on the furniture. (Everyone knows a bed is not furniture.) I’d go through a super thick Costco roller every other day defurrifying the bed each morning. (Everyone knows dogs shed their coats overnight, grow new ones and shed those before dawn.) My ChomChom Roller cost $25 and I’ve had it about six months now. (If Roomba and the ancient Mayans had a child it would be ChomChom and it would be gender fluid.)

My heart-as-big-as-the-world friend Teri, who rescued, fixed-up and fostered Zuzu and the three-legged toothless assassin known as Alfie, tells me she is super busy running Henry’s Hope, the foundation that rescues dogs, cats and all manner of sweet creatures from high kill shelters in Los Angeles (and then ships them out to suckers animal-lovers in Southeastern Wisconsin, namely Delafield). In spite of the 24/7 nature of the animal rescue vocation, there are still hours during the night when a person used to sleep (but is now in a semi-permanent semi-somnambulist state) that can be used for all kinds of important new work. Like many of us, Teri finds cleaning baseboards with a toothbrush and organizing and reorganizing the same junk drawer over and over worthwhile pursuits if the goal is to keep your hands busy enough not to bitch slap people with whom you are stuck living out the pandemic go crazy. (Got pictures of a super spiffy junk drawer? Whoosh them off to pam@pamferderbar.com I’ll publish them with next week’s blog.)

My dad has taken to humming and thumping out showtunes with a special affliction affinity for “Good Mornin’, from Singin’ in the Rain and ‘Tea for Two’, from hell. I used to think things looked better in the morning. Now it just scares me. I overheard my dad on the phone with someone who must have asked what he did all day. “Work on my computer, read and after my nap I watch the Trump show.” They used to be called press briefings, when they were conducted by actual literates public servants.

I did it. I went to the grocery store last Saturday. At first, I thought, that’s insane—the busiest day of the week! Then I realized there is no difference between Saturday. There was a line outside. Most people kept their social distance. Maybe a third wore masks. Two-thirds irritated me. Inside was another story. Hardly anyone kept their distance and they all frickin’ annoyed the crap out of me. For example, one ahole man stood right in front of what was once a bountiful Campbell’s Tomato Soup display that promised the warm comfort of bygone days when our moms cooked for us and we were not shut in like death row inmates. As I tried to see how many cans were left, a good ten feet away and using the opera glasses my ex-husband bought me years ago so we might take up opera because ‘enough Springsteen already’, I spied maybe four or five cans on the shelf.

As I barreled toward him with my cart, I doubt the man noticed I hadn’t washed my hair in a month, that my roots looked like a wide silver zipper, or that my eyebrows crept over my forehead like an extra furry Pyrrharctia Isabella. What he saw was a face mask, goggles, a shiny rubber yellow slicker and those paperish bootie things people wear in highly contagious hospital situations, to open houses in nice neighborhoods and on the show Dexter. I was perfectly attired to murder and dismember the man without getting a speck of DNA on my actual person. We were on the same page, he and I. He leapt out of the way and I snagged three cans of the soul-saving elixir known as Campbell’s Classic Tomato Soup. (I left two on the shelf so as to not be rude.)

I am not selling anything. I am appreciating the little things that under normal circumstances would be the unsung heroes of my life—pet hair removers, soup, dog rescuers, cousins. (If the ChomChom peeps are listening, I would totally take a case of rollers off your hands to give as gifts.)

Our governor, Tony Evers of Wisconsin, just extended the shelter-in-place order until May 26. He did this without legalizing pot. smh.

Be healthy and safe, and love each other.

It ain’t opera, but it sure is regal. Prince, Motherless Child.