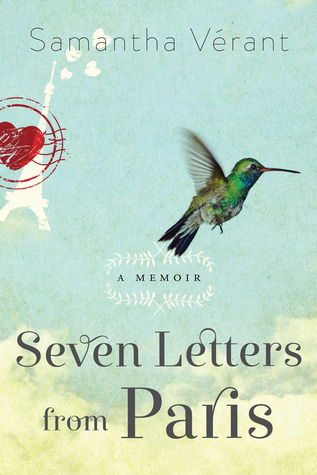 A review of SEVEN LETTERS FROM PARIS by Pam Ferderbar

Any time a friend writes a book I figure I’ll enjoy it because I obviously like that person well enough to call her or him friend. So it stands to reason I’ll like what he or she writes. Then along comes a book like Seven Letters From Paris, and it’s a revelation. An eye-opener. An utter joy.

Although I adored Samantha since the day we met, I mostly viewed her through the lens of being friends with her parents. I knew her stories through them. Her sadness was their sadness. Her heartbreak, theirs. I’ve only come to really know the person of Samantha through her exquisite memoir, and as a result she has taken shape as the guardian angel of second chances, and a living testament to the idea that we deserve true, deep, soul-mate love, and should never settle for less.

Samantha is the kind woman whom other women want as their best friend. She’s beautiful, but has just enough dirt under the nails to be a real broad. You know she’d have your back in any situation and be the first one at your side in celebration and sorrow. So reading her memoir is the savory experience of sitting with your best friend (assuming your best friend is a magnetic storyteller), glass of wine in hand, and listening closely while she spins a magical tale—a true story no less, of love lost and love found. And that’s only referring to her having found herself. The part with the Frenchman is just…bliss.

“Tonight I am cooking from the heart, choosing self-belief over fear.” This is the first sentence in the preface, and it conveys the wide-eyed wonder of a woman who has decided to follow her heart come hell or high water. It’s easy to look at her life in retrospect and say, yeah, sure, of course she should have done this and that. Of coursethere was a happy ending in the offing. But we mustn’t underestimate how difficult it can be to change—to really and truly change everything about the way we are living.

As women many of us are afraid to hurt someone’s feelings, especially if that someone is the man to whom we have been married for a decade—even if it has been a loveless marriage. The bigger issue is Samantha’s anxiety about whether or not she deserves to be loved, and that is a tough thing for anyone to face. It’s a lot easier to just keep putting one foot in front of the other and hoping that if things don’t get better at least they won’t get worse.

But in the back of her mind, perhaps where her family and friends had planted the seeds of worthiness, Samantha decided to reboot. And that is where her memoir begins.

As her 40th birthday looms large, Samantha faces down her fears, and after ten long years she finally leaves a loveless marriage, and the city she has called home for a decade. Penniless, jobless and feeling pretty hopeless, she moves across the country, and back in with her parents. That’s enough to make even the strongest person collapse, but Samantha started building momentum with that first step.

From there she evaluates the choices she’s made in her life, and decides to start cooking from the heart and not out of fear. She can’t escape the feeling that she may have met the love of her life 20 years earlier on a trip to Paris, but 20 years is a long time. What are the chances he’ll remember things the same way, if at all? What if she makes a fool of herself? And what if he is angry that she never answered even one of the seven love letters he wrote after they met—letters of longing, devotion, desire, and finally the last, of quiet despair.

Fortunately for us all, Samantha was not made a fool. And Jean-Luc hadn’t forgotten a thing. It turns out that for 20 years there was an ember burning in both their hearts.

Self-deprecating, joyful, hilariously funny and down-to-earth, Samantha’s memoir should be required reading for all women. The message is simple; happily ever after is a recipe that must be cooked from the heart.

And just because I can…I have to tell you that I was at their wedding, and as the French contingent and the Americans took turns reading from the seven letters, there wasn’t a dry eye under the perfectly moonlit sky. It was, and continues to be, a real life fairytale. Samantha is working on another book, Seven Hours from Paris, which promises to be as delicious and inspired as the first.